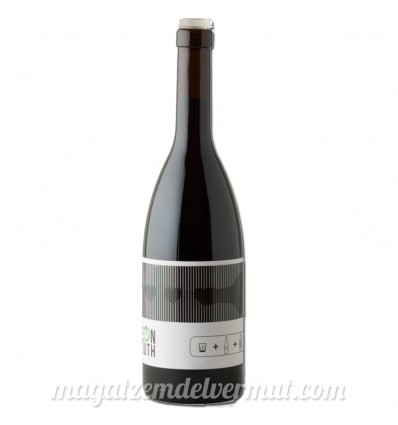 TurmeOn Vermouth is made in Zaragoza. The first vermouth of history that the label has movement.

Its secret lies in the fact that a certain amount of wine has aged for more than 80 years in barrels (Pipas) that our own grandfather (El Pipero) made.

Notify me when available

An alcoholic drink, especially one that is drunk before a meal

TurmeOn Vermouth is made in Zaragoza. Was born from a family recipe, where it has been elaborated for more than 3 generations.

Part of his secret is that a certain amount of wine has aged for more than 80 years in barrels (Pipas) that our own grandfather (El Pipero) made. Each time only a small part of wine is extracted from each "Pipa", making it possible so that, taking this vermouth, we can take a small portion of the wine with which it was originally filled.

The wine is macerated with 12 different botanicals, among which stand out cinnamon, clove and wormwood, three powerful aphrodisiacs known since the Middle Ages and protagonists in many recipes of "love potions". Hence its name "Turn Me On".

In nose, intense highlighting aromas of nuts, hazelnut, walnut combining with sweet tones of raisins and fig. We also find balsamic notes that give us a pleasant bitter touch.

he palate is dense and sweet (without being cloying), intense, easy and long aftertaste, remembered the aromas that we already received in the nose.

Be the first to write your review!

30 other products in the same category:

Products from the same manufacturer

We have the best selection of vermouths on sale worldwide, maybe some vermouth is not in our portfolio, little by little we are introducing them all. If you know a direct manufacturer and it is not in our ranks you can not notify without problem!

Aperitif.shop hereby informs you of the use of first and third party cookies on this website in order to improve and enhance your user experience.
If you continue to browse, we presume your implicit acceptance of our cookies policy.